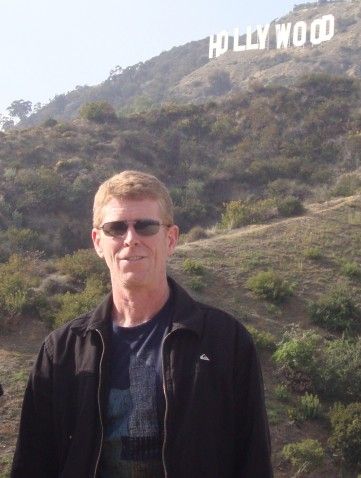 Hollywood California, where some dreams come true and others turn into nightmares. A place where you can reach out and touch "the stars" and yet remain a million miles away from the light.

It has been just over a year since I left Charleston SC (My home and favorite place in the world) to set off on my adventure to travel, play music and try to spread a little "Carolina Love" to the rest of the world. After traveling for a couple months I ended up here in Hollywood CA. I have been here for about a year now and it has been exactly "As Advertised".

As you ride down Sunset Blvd in Hollywood on a Friday night it's easy to see why so many people come here looking for fame and fortune. The strip is filled with beautiful people, lots of money and the three B's as I like to call them, Bentley's, Benz's and Beamers (BMW'S). Your wildest dreams right there on display. Just stop in the Rainbow Room on sunset. A classic Hollywood hangout spot. You'll see exotic cars like a half million dollar Original Shelby Cobra for example, sitting out front and any number of famous rockers or actors inside the joint surrounded by young beautiful people hoping to rub shoulders and even become friends with these celebs. Aspiring actors, writers and artists of all kinds hoping to meet that one person that can change their lives forever. The problem is, a lot of these young people that come out here get caught up in trying to be part of the scene. Trying to get discovered that way instead of putting in work developing their craft. Me I'm old enough to know better. Although you may never have MUCH control of how successful you are as an artist, you do however have TOTAL control over how good you are at expressing yourself and your art honestly and to the very best of your ability. This is developed through self discipline, dedication and a true love for what you do. A creative process that is forever growing and never satisfied with the latest accomplishment.

So of coarse I joined a band (Jet Pilot Jerry) and started booking solo shows so I could put in work as soon as possible. And more importantly, I started practicing guitar and writing more than ever, what Jazz players call "Woodshedding". But, I'll get back to the music in a bit.

Now let me tell you about a little something different I decided to try. I figured it was time for me to expand my artistic horizons. So, I thought it would be fun to work in television and movies. "When in Rome" right?  I got to act in a short independent film Called "Teacher Of The Year"  https://www.youtube.com/watch?v=BGqjcZWXzrk written and directed by my friend R.J. Smith as well as playing a Zombie in another independent project. The contrast between being an actor and a musician/songwriter is challenging. As a musician I've spent my whole life trying to get people to know the TRUE me. Where as an actor, it's about perfecting the art of being someone else.  I have worked as a stand in and a Production Assistant but mostly as a background actor. Doing this work I've been lucky to see some amazing actors work in person. Alfred Molina, Jim Carrey, James Gandofini, Kate Hudson, SNL Alum Molly Shannon, Chris Parnell and Ana Gasteyer to mention a few. On the contrary, I've also worked on a lot of sets with actors that weren't that great. Seeing people with little experience, not knowing their lines and/or just being unprofessional in general makes you really appreciate the actors that are good and the work they put in to be that good. In the past year I've worked on all these shows and movies. It has been a lot of fun and quite the learning experience. 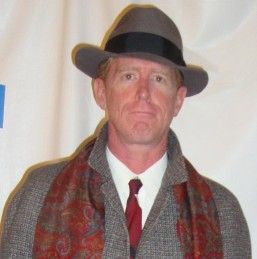 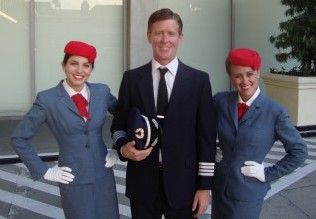 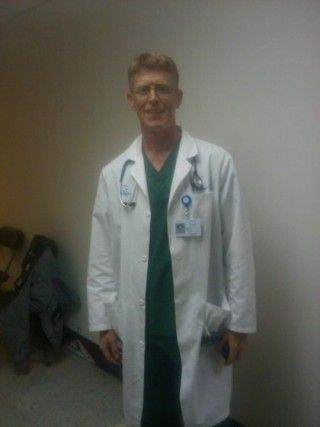 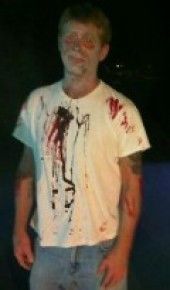 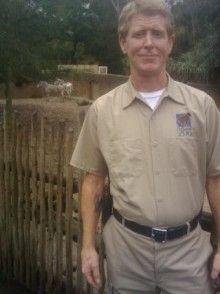 So back to my favorite subject, MUSIC. As I mentioned earlier, I joined a band called Jet Pilot Jerry. A very guitar driven sound JPJ has influences all over the spectrum. Our lead man is my good friend Rodney Smith. RJ as some call him is very influenced by music of the 90's and he is more than just a singer/songwriter guitar player. He is also a talented actor/writer/director with some great work under his belt. Adam Vogt is our bass player. Adam seems to like a lot of progressive and classic rock. He is also an improv actor. On drums we have a cat named Jeff Kazanjian. Jeff is a stand up comedian. Thank god he is funny as hell. It would've been rough to play music with him if his act was lame. I haven't really figured out his influences yet. I play lead guitar and have recently started singing some songs as well. If your reading this chances are you know my influences. Miles, Tupac, Stevie Ray, Dave Mathews, David Gilmore and so on.

Thanks to the open-armed attitude of some local musicians it wasn't long at all before we were playing out. My first solo show and my first show with Jet Pilot Jerry were on the same night at the same venue. O'brien's Pub in Santa Monica. It was a lot of fun and I met a lot of good people that night. 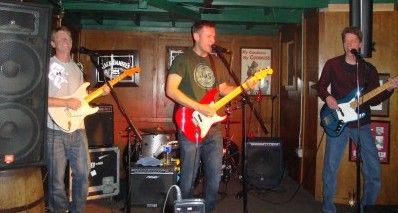 Since then I have played all over the Los Angeles area. From the Santa Monica Pier playing solo for tips to playing with JPJ at the famous "Kibitz Room" or "The Mint" a legendary music venue in LA since 1937. 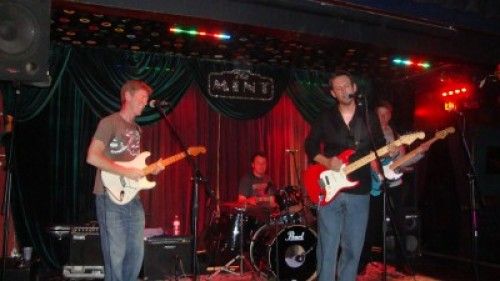 Here is the link to a Jet Pilot Jerry song

Enough about me. Now it's time to get down to business and check out the LA local music scene. What I found was unexpected. For such a big town it seems a lot of the local musicians know each other well and are very supportive of one another. No one plays much cover music either which was a nice thing to hear. The problem here is that there are so many musicians that will play for free or even "Pay To Play" that it is hard to make money playing out. They call it "Pay to Play" out here when a venue books you, you are expected to sell a certain amount of tickets. Anywhere from 10 - 50 tickets depending on the venue. What ever you don't sell you have to pay for out of pocket. So it can be a tricky situation if you can't draw a good crowd. That mainly pertains to the premiere venues in Hollywood like The Roxy, The Mint, Viper Room, etc... Most shows in other parts of town are 3 or so bands playing for free just trying to get their (Original) music out there. Ok, enough about how the music scene here works, let me tell you about what I've seen and heard. Lots of talent in this town.

So off I go and where better to start than the world famous "Sunset Strip". I went to "The Roxy Theatre" upstairs there's a venue they call "On The Rox". I saw a Singer Songwriter named Kelli Debbs (http://www.kellidebbs.com/) http://www.facebook.com/pages/Kelli-Debbs-Music/477165940192?fref=ts. What a great first act to see in LA. A voice that you wouldn't believe and a really good songwriter as well. 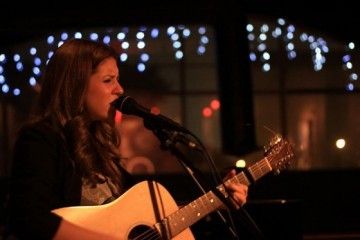 Next I went to another classic Hollywood venue. The Kibitz Room (in Canters Deli http://www.cantersdeli.com/lounge.html). A venue where the likes of The Doors and Frank Zappa could be seen back in the day. And Guns & Roses, The Red Hot Chili and even the Wallflowers have played (and eaten) here as well. I was there to see a band called Stage 11.  (http://www.Stage11music.com/) A Charismatic front man in Diego Garcia, a tight band and great songwriting make these guys definitely worth checking out. They're also good people who really support the local music scene. They have put me and my new band Jet Pilot Jerry on a bunch of shows including a few at the Kibitz Room. 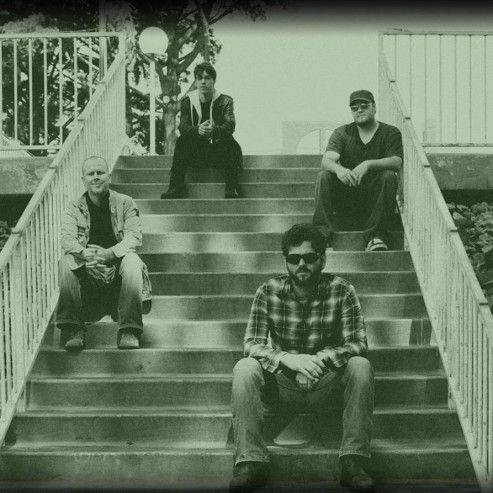 Speaking of a band that is supportive of the LA music scene XYZYX (http://xyzyxtheband.com) is a band that I saw at another Premiere Hollywood venue, The House Of Blues On Sunset. If I had to use one word to describe XYZYX it would be FUN. With their semi choreographed stage moves and running around like crazy people this band is fun to watch. But don't let that fool ya. Some bands will use theatrics like this to cover up a lack of musical skill. NOT the case here! These cats are solid players, good song writers and well rehearsed. The man out front for XYZYX is named David Daskal. David is a man of many talents. (Like most artists out here) Other than being a singer and a songwriter he is also an actor, writer, and producer with his own youtube series called "ISSUES" https://www.youtube.com/watch?v=NpYzd0ijxQA very funny stuff. David Daskal is also the guy that booked me my first show in LA (The O'brien's show) within 5 minutes of meeting him. I appreciate the fact that he was quick to put the new guy in town (Me) on a bill just like that. He did research me before we actually confirmed but he offered me the slot before even hearing me. That was cool. 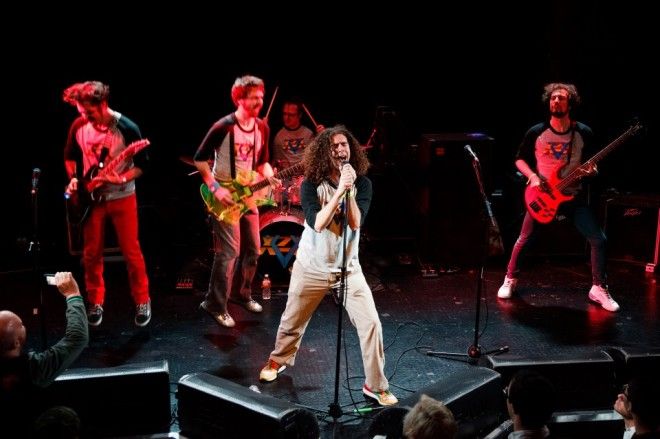 Other notable acts I've seen here, "Simply" https://www.reverbnation.com/bandsimply A blues trio with a guy named Namseok Kim playing lead guitar and killing it. Reminds me of Jimmy Page. Nam (As he goes by) is from Seoul Korea and is a graduate student at UCLA, studying science and electrical engineering. Man this kid can play! And he is one of the most humble nicest people you'd could hope to meet.

Another band I like a lot is called Powertribe. http://www.facebook.com/powertribe?fref=ts Also a power trio this group is lead by Darren Stroud. Darren is a true shredder in every sense of the word. First time I saw him he reminded me of Randy Rhoads. And he was playing with blues band at the time if that tells you anything. Powertribe is a throwback to players like Tony MacApline, Eric Johnson, Joe Satriani etc... The kind of stuff I grew up on so it is cool to see and hear.

Just one more band I'd like to mention before I go on is "Lobate Scarp" http://www.facebook.com/lobatescarp?fref=ts Described as " Los Angeles's best progressive space opera rock band!" They do live up to the hype. Epic songwriting and arrangements backed by excellent musicianship make their music really stand apart from most music you hear these days. Their soon to be released new album "Time and Space" is a sound all in it self and is one of my favorite independent recordings I've heard.

Now I could go on about all the talented musicians and artists I've seen out here but that could take days. So I'm just gonna wrap it up here. Thank you for reading my story. I'm going home to Charleston a week from today on Jan 22nd and I'll be playing my favorite venue ever, The Charleston Pour House on Jan 31st so keep an eye for my Chucktown story in the next couple weeks. It should be a good one.