Basic music theory is based around what is called the “Major Scale”. You may remember singing it with “The Sound Of Music” in grammar school, “Do, Re, Me, Fa, So, La, Ti, Do”. As I said earlier there are twelve notes on the guitar. With the Major scale we are only using seven notes. What I am concentrating on with this lesson is the Major scale in five positions on the neck of the guitar. For this lesson we will play in the key of G. By learning G Major in five positions you will basically know ALL the notes in the key of G Major on the neck of the guitar. The great thing about the guitar vs some other instruments (piano or wind instruments) is that once you learn to play the major scale or any other scale in one key (key being the note you start on) you can play it in any key just by sliding your hand up or down the neck of the guitar. When playing some instruments the fingering is different for different keys. So basically learn one key on the guitar and you automatically know how to play in all other keys.

To me improvisation (Creating music on the spot as you play) is the most fun part of playing music.  Most people think it is much more difficult than it really is. To improvise on an advanced level does take years of practice and self discipline. But, anyone can improvise at a basic level on day one just by playing the major scale in one position. Once you learn the Major scale in the five positions your ability to improvise will increase noticeably. You just play the notes you know are in key and you will always be tonally correct. In my opinion the sooner you start to improvise the more your confidence builds as a player and then better you’ll be in the long run. 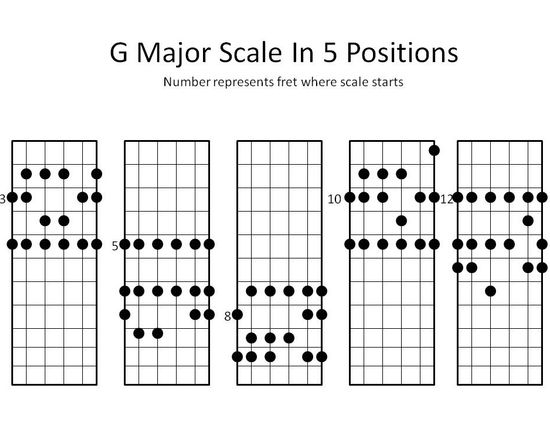 Learn even one of these positions, go to youtube and search Backing Track in G Major and you will find plenty of instrumental play along tracks that are designed to practice improvising over.